Stripe API keys are stored in the database, and editable from the Django admin.

By default, keys are visible by anyone who has access to the dj-stripe administration.

You may add new API keys via the Dj-Stripe "API key" administration. The only required value is the key's "secret" value itself. Example: 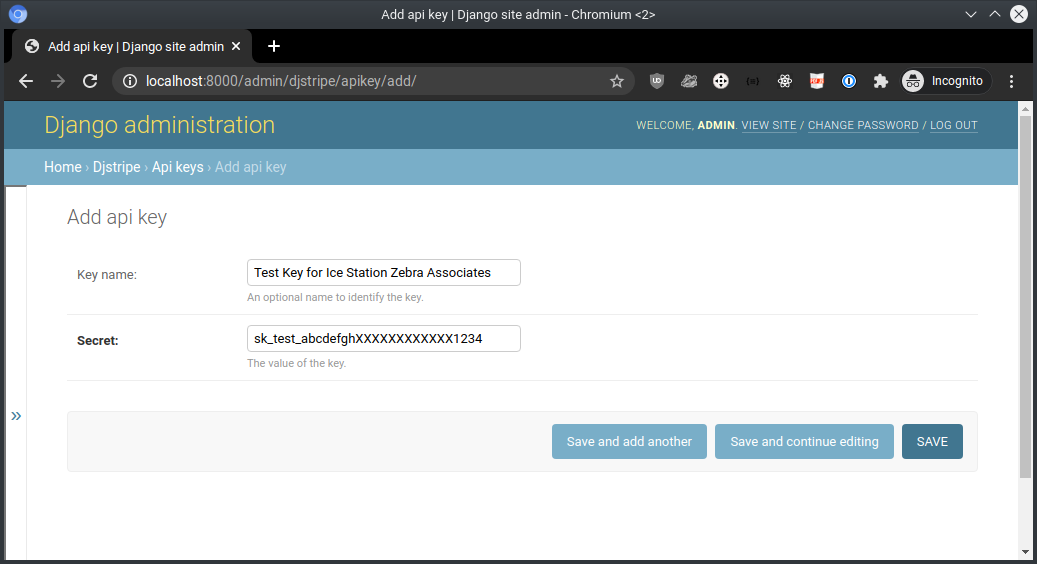 Once saved, Dj-Stripe will automatically detect whether the key is a public, restricted or secret key, and whether it's for live or test mode. If it's a secret key, the matching Account object will automatically be fetched as well and the key will be associated with it, so that it can be used to communicate with the Stripe API when dealing with objects belonging to that Account.

When expiring or rolling new secret keys, you should create the new API key in Stripe, then add it from the Django administration. Whenever you are ready, you may delete the old key. (It is safe to keep it around, as long as it hasn't expired. Keeping expired keys in the database may result in errors during usage).

Why store them in the database?

As we work on supporting multiple Stripe accounts per instance, it is vital for dj-stripe to have a mechanism to store more than one Stripe API key. It also became obvious that we may want proper programmatic access to create and delete keys. Furthermore, API keys are a legitimate upstream Stripe object, and it is not unlikely the API may allow access to listing other API keys in the future, in which case we will want to move them to the database anyway.

Please do keep your billing database encrypted. There's a copy of all your customers' billing data on it!

You may also instead create a read-only restricted key with all-read permissions for dj-stripe. There is no added risk there, given that dj-stripe holds a copy of all your data regardless.

I'm using environment variables. Do I need to change anything?

Not at this time. The settings STRIPE_LIVE_SECRET_KEY and STRIPE_TEST_SECRET_KEY can still be used. Their values will however be automatically saved to the database at the earliest opportunity.

What about public keys?

Setting STRIPE_LIVE_PUBLIC_KEY and STRIPE_TEST_PUBLIC_KEY will be deprecated in 2.5.0. You do not risk anything by leaving them in your settings: They are not used by Dj-Stripe outside of the Dj-Stripe mixins, which are now themselves deprecated. So you can safely leave them in your settings, or you can move them to the database as well (Keys beginning in pk_test_ and pk_live_ will be detected as publishable keys).